A Dose of Ginger

A Storyteller's Collection of Stories To Tell

So! Studying! I’m studying for finals (well, I was a few minutes ago, and I decided to take a brief blog-break) and it’s kind of really stressful. But that’s okay. The stressful aspect is why I take breaks like this. But seriously, this is what my desk looks like: 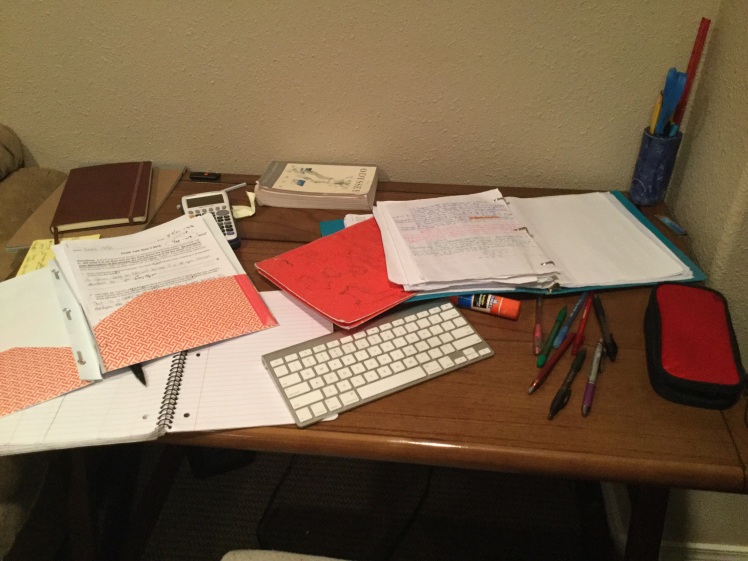 This mess was organized on Friday. It’ll be a wonder if I retain anything out of those beautifully color-coordinated notes you see … lying on top of my Biology folder full of notes … See what I mean?

Anyway, wish me luck on finals. I’ve got math and history on Wednesday, and then other things on Thursday and Friday that I’m refusing to remember because it stresses me out more.

In other news, I’ve miraculously found time to write in the past week. I’ve written several pages in the book and I even wrote the start for a new story (so I wouldn’t forget). The idea is it’d be centered around a detective, because I love mysteries. I may or may not follow through with that idea, but the opening I wrote is kind of fun. (I came up with it at one in the morning.) Let me know if you want to see it.

Also, we had my cousins and aunt and uncle over for food and games this weekend! It was a welcome excuse to not study. I didn’t even need to find some petty thing with which to procrastinate!

My cousins and I started the afternoon with a high-stakes game of Candy Land, with Youngest Brother. That was over in about fifteen minutes–Youngest Brother quit about five minutes before it ended (he wasn’t winning).

Then we played Apples to Apples! Guess who won?

The players were myself, Younger Brother, Younger-er brother, and my five cousins. Not to brag or anything, (heh, I’m totally bragging) but I kind of DOMINATED.

Except we’re all competitive, so when I reached five green cards (we were playing to six) they started being very careful about which red card they picked as the winner because they did NOT want to pick me on accident.

It was Younger-er Brother who finally picked my card and inadvertantly made me win. (The word was “nasty,” and I played “Airline Food.” Come on, it was a winner.)

From there, we decided that we wanted to something slightly more active, so we played hide-and-go-seek. I didn’t tell them (Younger Brother knew, though, and he noticed the evil look in my eyes when I suggested hide-and-go-seek) that hide-and-go-seek is my home TURF. I always win, because I have the actual best hiding spots.

Anyway, we played six rounds, I believe. I won two out of the first three, by hiding in an obscure spot somewhere in the vicinity of my room (I’m not giving it away, okay? They didn’t find me, they gave up, so I can use that spot again.) Then one of my cousins won (I hid in the garage, where Younger Brother didn’t check at first because he figured no one would be crazy enough to hide in the freezing-cold garage. Well, here I am). Then I won the third round by hiding in the closet with the furnace in it.

I think it helped that I decided to wear black that day.

Anyway, I won the last three rounds with a particularly INGENIOUS spot. I stayed there all three rounds and they had to give up on the last one because they just couldn’t find me.

So, in a room in our house that SHALL REMAIN UNNAMED (they read the blog sometimes, okay? I can’t just go giving away my top-secret hiding spots) there may or may not be a place that has access to the inner walls of the house. I may or may not have hidden in the woodwork.

Then we played Pictionary, where I discovered that I’m really good at guessing things. My team won.

So, let’s recap: we played Candy Land, Apples to Apples, Hide-and-Go-Seek, and Pictionary.

I won Apples to Apples, Hide-and-Go-Seek, and Pictionary.

It was really super fun to see my family, though, and we all had fun (to my knowledge.)

I hope you all had an awesome weekend, and good luck with the week! 🙂 Time to go hit those books some more.

Things People Have Said About What I Write:

Archives, Which I Couldn’t Think of A New, Witty Name For:

Categories: I Have One Now